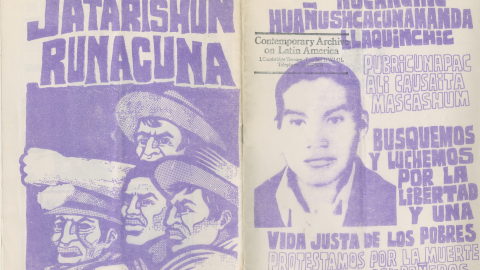 The majority of the collection consists of the former holdings of the Contemporary Archive on Latin America (CALA), which from its inception in 1976 sought to build up a combination of academic and ‘alternative’ sources of information for the use of students, teachers, researchers, solidarity and human rights committees, journalists, development and volunteer agencies, television programme producers, trade unionists and the like. The contacts it maintained with documentation and educational centres in Latin America and other parts of the world and the provision it made for housing rare materials jeopardized by political developments in the region ensured that its collections were both rich in their depth of coverage and often unique.

By 1981 however, funding was not available to support the archive and was forced to close. Originally, its collections were to be divided between the Latin America Bureau, the Institute for Race Relations, the CARILA Latin America Resource Centre and the Nicaraguan Ministry of Planning, but these organisations were unable to organise the re-housing of the material before the deadline for vacating the CALA premises. As a consequence, it was rescued by the Institute of Latin American Studies (ILAS), which merged in 2004 with the Institute of United States Studies to form ISA and today continues as the Centre for Latin American & Caribbean Studies (CLACS) at the School of Advanced Study, University of London.

In 2003, the University of London Vice Chancellor funded a joint project between ILAS and the Institute of Commonwealth Studies (ICwS) aimed at improving access to and use of their collections of political ephemera. This has involved the creation of an item-level catalogue and the uploading of collection-level archival descriptions to both the Archives Hub and AIM25 databases.

Although the collection (which consists mainly of items in Spanish, Portuguese and English) covers every country in Latin America, it is particularly strong in certain areas. There are currently around 140 boxes of materials (around 4,000 items). As an example, the Chilean boxes are mostly concerned with the build-up to and the aftermath of the 1973 coup, including election posters for Salvador Allende and pamphlets written by apologists for the Pinochet regime. In addition, there are many contemporary and obscure items produced by leftist opposition groups in the 1970s.

Another strength of the collection is its coverage of human rights bodies in Central America in the late 1970s and 1980s. Much of this material came through the links between the Latin American organisations and solidarity and support groups in this country. The same occurred with materials arriving from countries like Argentina and Brazil.

This brief introduction to the formation, development and contents of the Latin American political ephemera collection has sought to indicate their variety and depth as well as the fact that they contain a great deal of material that is either difficult or impossible to acquire elsewhere.

The collection is open for reference purposes to all researchers and postgraduate students. Anyone interested in either consulting it or obtaining further information should contact: