Teaching with 'A Handbook': Languages, Cultures and the Transnational Optic 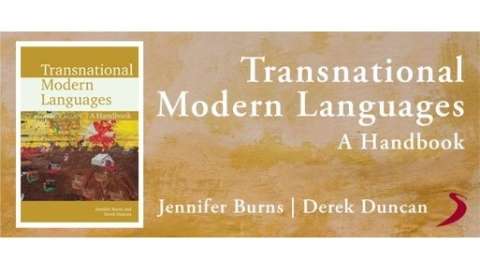 Professor Mary Louise Pratt will deliver a short critical response to the recently published Transnational Modern Languages: A Handbook (Liverpool University Press 2022) edited by Jennifer Burns and Derek Duncan. Professor Charles Burdett (ILCS) will then lead an open conversation on transnational teaching practice in Modern Languages with the book’s editors, a selection of its contributors and leading voices in the sector.

A Handbook offers a selection of ‘keywords’ which serve as prompts for the contributors to range across language areas, cultures and historical periods and devise innovative ways of thinking about connecting cultures and about the transformations that occur when cultures and languages come into contact. These points of cross-cultural connectivity do many things not least call into question the rigorously patrolled nation boundaries of the disciplines in which we work. This online launch event investigates and proposes some of the multiple ways in which the creative intellectual labour of the essays in A Handbook might be put to practical use and further the transformation of research and teaching across the spectrum of languages and cultures.

In preparation for the workshop, a number of key figures in Modern Languages have recorded short videos where they reflect on the book’s possible uses. They address questions of A Handbook’s relevance, and the sort of real world issues it responds to. They test its purpose and value as a teaching tool for specific language areas and its possible use for students. Crucially they reflect on whether the collection and its ‘transnational optic’ allows us to do anything we don’t do already and what new territories it might lead us into.

The video commentaries (which can be watched in advance of the workshop) are available on A Handbook’s web space.


Mary Louise Pratt is Silver Professor in the Department of Spanish and Portuguese and the Department of Social and Cultural Analysis at New York University. A tireless advocate for the value of multilingualism and advanced language competency, she is the author of numerous publications which have re-defined understandings of cultural and linguistic interactions. Her magisterial Imperial Eyes: Travel Writing and Transculturation (1992) and its central concept of the ‘contact zone’ are enduringly influential. Her most recent collection of essays, Planetary Longings places the interrogation of colonial and neocolonial violence and the politics of decolonization as the critical nexus of our discipline’s future thinking.

All are welcome to attend this free event, starting at 2pm BST. Please register in advance to receive the joining link, using the Book Now button at the top of the page