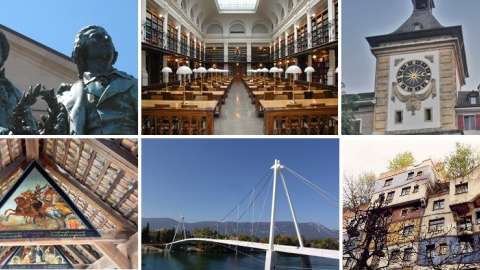 Join the Friends of Germanic Studies at the IMLR for as little as £10 annually (student rate) and make a real difference to the future of the discipline! Established in 1986 to promote those activities which were beyond the means of the Institute's slender budget, the Friends have long directly supported research in the languages, literatures, and cultures of the German-speaking countries, sponsoring lecture series, special publications, visiting fellowships but, above all, studentships in the field of German studies.

The Library holds a special place in the Friends' affection: grants have been made not only for the purchase of new books, but also via the Save-a-Book Scheme for the restoration of many older and important volumes which, now once more accessible to readers, would have had to be withdrawn from use.

The current climate in the study of modern foreign languages means that institutes rely increasingly on the goodwill of their Friends, and the very significant contribution they make, to maintain the services and facilities upon which researchers depend.

The Friends usually meet annually in the spring, the event combining a short lecture on a topic of general interest with the opportunity to renew social contacts. In appreciation of their support, Friends are invited to special events (for example, the Bithell Memorial Lecture, the Miller Memorial Lecture, author readings and performances organised with the Globe Theatre, German Embassy and others), and receive complimentary copies of the annual Friends magazine and published lectures. Titles published in the Germanic publications series can be obtained, and conferences attended, at special rates.

Joining the Friends of Germanic Studies

You can join the Friends of Germanic Studies on an annual or lifetime basis.

Tax-effective Giving. If you pay tax in the UK, Gift Aid is an easy way to increase the value of your gift, enabling us to reclaim tax at the basic rate (currently 20%) on the amount paid, at no extra cost to the donor. Companies taxed in the UK can claim relief on their donations.
The University of London is an Exempt Charity within the meaning of Schedule 2 of the Charities Act 1993 and as such is a charity within the meaning of Section 506(1) of the Income and Corporation Taxes Act (ICTA) 1988.

'To teach and delight' – In Memory of John Flood

A Podcast is now available. 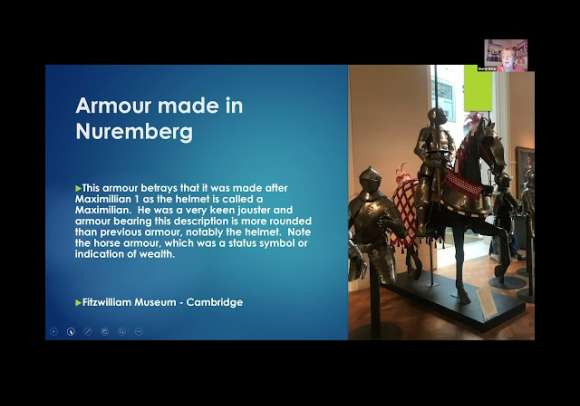 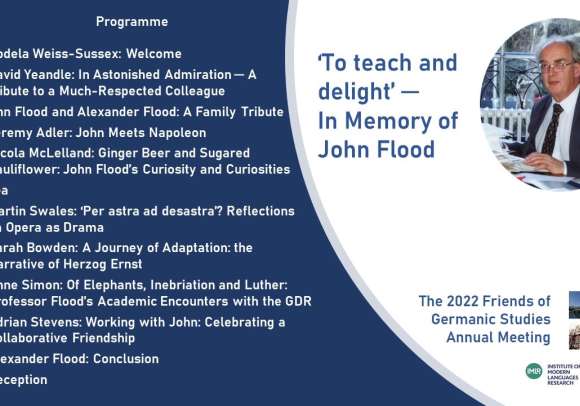